Vista's dedicated team delivers experience and expertise in the exploration and production of natural gas. 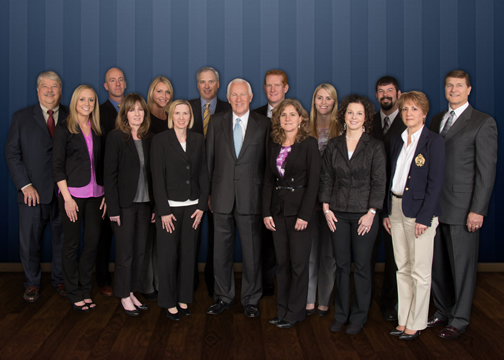 Clark R. Nicklas
As Chairman and CEO, Clark R. Nicklas has assembled a highly-skilled management team with the vision and commitment to establish Vista Resources as one of the fastest-growing, independent producers of natural gas in the U. S. Prior to founding Vista in 1987, Mr. Nicklas was Vice President of Natmin Development Corporation, an oil and gas subsidiary of National Intergroup, Inc. He also served as President of HB Drilling Programs, Inc. and Vice President of Haddad and Brooks, Inc. During the last 30 years, Mr. Nicklas has been responsible for the drilling of over 1,200 wells across the country. He received a Bachelor of Science Degree in Mechanical Engineering from Clarkson University and completed graduate courses at the University of Pittsburgh and Wayne State University, earning a Masters of Business Administration.

David M. Nicklas
Mr. Nicklas has served in the role of President since 2008 and held various executive level positions since joining the firm on a full time basis in 2003. Under his direction as President, Vista has drilled over 150 wells and his responsibilities include overseeing Vista’s geology, accounting, land, sales & marketing and operations departments. Since prior to joining Vista, Mr. Nicklas worked at Northern Trust Bank in personal trust administration and operations. He earned a Bachelor of Art degree in Economics from Brown University.

Thomas R. Michael
Serving as Vice President of Exploration & Development and Chief Geologist, Mr. Michael manages the Exploration and Development staff, and is responsible for drilling projects throughout the Appalachian Basin and exploration programs nationwide. He has been involved in the drilling and completion of over 2,000 natural gas wells in the Appalachian Basin. Before joining Vista in 1990, Mr. Michael served in a number of geology and exploration management positions with Cabot Oil & Gas and Doran & Associates. He earned a Bachelor of Science degree in Geology from Edinboro University.

Arlene Cassidy
Ms. Cassidy serves as Vice President/Controller of Vista Resources, and is responsible for all financial reporting systems, forecasting and tax planning. Ms. Cassidy is Vista's primary liaison with the financial community. She is also responsible for partnership reporting, distribution of production revenues and preparation of monthly financial statements. Ms. Cassidy has been with Vista Resources, Inc. since 1993 and received a Bachelor of Science degree in Business Administration from Duquesne University.

Patricia L. Stauffer
As Manager of Accounting, Ms. Stauffer is responsible for a numerous areas within the accounting department including distributions to landowners and drilling program participants. She joined Vista in 1998 and received a Bachelor of Science degree in Business Administration from Robert Morris University.

Jennifer A. O'Toole
Serving as Manager of Investor Relations, Ms. O'Toole is assisting investors and advisors with any questions pertaining to Vista’s drilling programs including completion of program documents, drilling updates, web site access and additional questions that may arise during the full lifecycle of a drilling program investment. She joined Vista in June 2007 and received an Associate Degree in Specialized Business from Bradford School.

Joel A. Hoffman
As Geologist and Exploration Technology Manager, Mr. Hoffman teams with Mr. Michael in selecting drilling sites for the Appalachian Basin. He has worked at Vista since 2007 and received a Bachelor of Science degree in Earth Science from California University of Pennsylvania.

Keri C. Brunk
As Staff Accountant, Ms. Brunk is responsible for assisting in the preparation of financial statements and K1 Schedules. She joined Vista in 2009 and received a Bachelor’s degree in Accounting from Penn State University.

Ronnie Whiteside
As Accounts Payable Manager, Ms. Whiteside oversees the payment and billing for products and services for all wells and drilling programs. She joined Vista in 2006 and received her Bachelor’s degree in Economics and Business Administration from the University of Pittsburgh.

Rodney B. Stauffer
As Manager of Land and Contracts of Vista Energy Resources, Inc., Mr. Stauffer is responsible for all land duties including landowner relations, oil and natural gas leasing and title curative. Mr. Stauffer joined Vista in 2013 after serving as Senior Landman of EXCO Resources from 2010-2013 where he was responsible for leasing operations, right-of-way and site acquisition for pipelines and compression facilities, and document preparation for acquisitions and divestitures. He previously worked at Vista as Land Manager from 2004 to 2010 and at Duquesne Light for over 20 years prior to joining Vista. Mr. Stauffer received a Masters of Business Administration degree in Management from Robert Morris University in 1997 and a Bachelor of Art degree in Management from Robert Morris University in 1986.

Thomas E. Hillman
As Superintendent of Production, Mr. Hillman is responsible for all Vista producing wells in the Appalachian Basin. He joined Vista in 1990 and aided by his extensive experience in the field, Vista has grown from 32 wells at the Sandy Lake Field to over 800 wells.